Working Group 2’s investigations identified gaps in legislation at the country level. The results of the international survey provide relevant exposure data and can highlight norms and acceptability of various controls, needs for infrastructure and aspects of bicyclist culture. The survey and its results are therefore useful tools for the development of legislation and regulation, both on a European level and within individual countries.

International Survey of Bicycle Use, Attitudes and Safety, with an Emphasis on Helmet Use
Both Working Group 1 and Working Group 2 encountered similar challenges in the collection of existing Europe-wide data regarding cycling, helmet usage and accident information. Simply stated, a lack of a standardised reporting structure made comparisons between countries extremely difficult. After a comprehensive review of literature already available on this topic, Working Group 2 developed an international, multi-lingual survey to collect data across countries, cultures and demographic groups.

The survey comprised 118 questions related to 1) biographical data, 2) frequency and amount of cycling activity in different environments for different purposes, 3) frequency and circumstance for use and non-use of helmets, and the attitudes and reasons behind these decisions, and 4) crash involvement and level of reporting to the police.

Beginning with a pilot survey in Israel, Working Group 2 collected data and used it to further refine the overall survey. In addition, two scientific papers were published, outlining the rationale, method and approach, and initial partial results of the international survey. This exposure brought the topic and issues surrounding bicycle helmet usage to the forefront, and helped disseminate knowledge, information and the current challenges in this field of study.

Whilst the bulk of the insights and products of the survey will be published after the COST Action has been completed, some preliminary results are provided now. As was expected, the data gathered from survey participants in different countries reflected significant variations in cycling habits and use of helmets. Both the similarities and the differences are important for general and country-specific implications.

Preliminary results from the survey offer important insights. The median distance cycled per week ranged from 30 km in Israel to 150 km in Greece. The overall median distance among all participating countries was around 50 km per week. More than 40% of all cyclists commonly rode city/hybrid bikes, 20% rode mountain bikes, and 15% rode road bikes. More than 60% of respondents reported wearing a helmet ‘always’ or ‘almost always’, and nearly 30% report wearing them ‘never’ or ‘almost never’. Thus, both use and non-use of helmets seem to be strong habits that transcend times, situations, and locations. Approximately 25% of all respondents reported having been involved in at least one crash in the past year, with the lowest frequency in the Netherlands (15%) and the highest in Australia (46%) and Spain (45%). Among the most severe crashes, 53% were single-person accidents involving a fall. Less than 10% of crashes were reported to police, and only 32% of cyclists involved in a crash with a motor vehicle reported their accident to authorities. Further analysis of the complete survey results will be conducted to determine the influence of demographics, bicycle types, and attitudes about bicycling and helmet usage. Correlations between these factors and crash data will then be drawn. 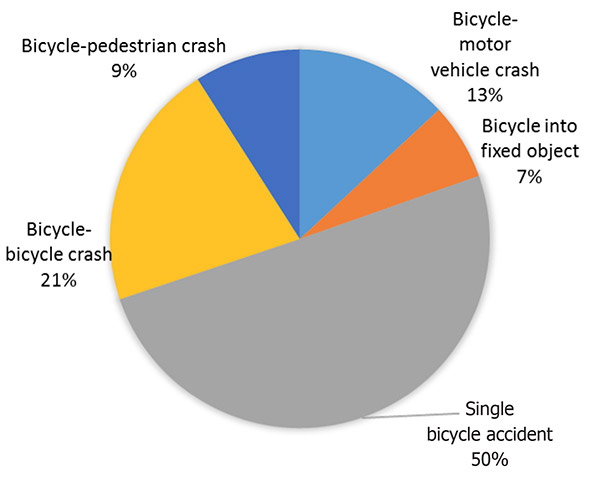 Distribution of bicycle crashes by type