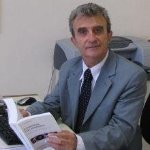 Joannes Chliaoutakis is a Professor of sociology at the Department of Social Work at the Technological Educational Institute of Crete (TEI of Crete). He is also, the Head of the Laboratory of Health and Road Safety. He served as the Head of the Department of Social Work from 2004 till 2006 and since 2009 he has been the Head of the School of Health and Social Welfare, Technological Educational Institute of Crete. Since 2005 he is a member of the Executive Board of the Master Degree Program “Environmental & Occupational Health-Management & Financial Assessment” organized by the Medical School, University of Athens. He has been involved in 19 local and national research programmes. He has been nominated as national delegate of Greece in the Management Committee of the project “COST 357 PROHELMET”, W.G1 – “Barriers & Motives from the use of Helmet by the young drivers” (2006-2009).

He leads the Laboratory of Health and Road Safety participation in two projects: the COST 357, PROHELM, W.G1 – Field Study: Cognitive aspects of accidents (2006 up to now) and has led the Leonardo da Vinci Program – “Towards safer road traffic in Turkey through continuous education and lifelong learning of driving instructors”. He has also led a number of other projects, such as the Operational Programme for Education and Initial Vocational Training (O.P. "Education"), ARCHIMEDES I, “Lifestyle, risk related driving behaviour and car crashes”, which ended with the publication of the Final Report in 2007. Also, he was Director of the projects “Lifestyle, Risky Driving Behaviour and Accidents” (2004-2006) and “Lifestyle and Violence between cohabiting couples” (2005-2007). He has been responsible for the E.U Network for the study of attitudes towards Condom Use (1994-1997) and a member of the E.U. Network for HIV/AIDS evaluation (1995-1997), the E.U. Network for the adolescence's consummation (1995-1998) and the E.U. Network for the social work on the Border-crossing Prostitution and HIV Risk (1995-1998).