In-depth Analysis of Head Injuries, and the Effectiveness of Bicycle Helmets in Real Accident Situations 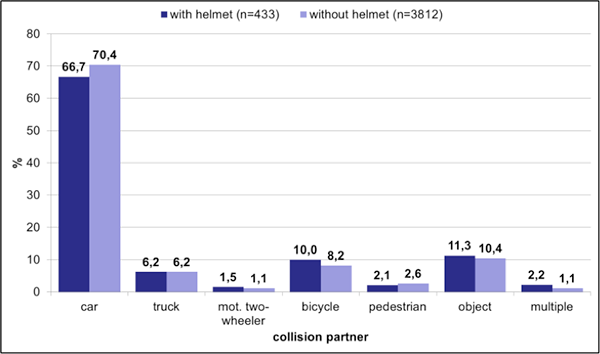 Percentage distribution of the collision partners of injured cyclists with and without helmet.

In Germany, a database of head injuries sustained in accidents, the German In-depth Accident Study (GIDAS), revealed that overall, helmet usage rates are increasing in Germany. However, the number of cyclists who currently wear a helmet is about 10% - still extremely low.
However, the GIDAS study also shows a strong tie between helmet usage and the reduction in both the frequency and severity of head injuries. Helmets provide a significant protection against skull fractures, severe brain injuries, and skull base fractures alike. About 40% of cyclists who did not wear a helmet suffered head injuries as the result of accidents. In 13% of those cases, the head was the only body part to be injured, and in 23% of cases, the head was the most severe of injuries sustained to multiple body parts.

Bicycle helmets can also be considered to be particularly effective for older adults, especially those over 50 years of age. In this age group, a significant increase in severe head injuries could be observed, attributed to the much lower biomechanical load limits for older persons.

Optimisation of helmet design based on accident observations

Working Group 1’s investigations showed that optimising helmet design, particularly on the sides and edges of the helmet, could have a positive effect on the reduction of severe injury. In terms of shock absorption, extending the protection zone currently identified in the existing standard CEN EN 1078 would be appropriate. Impacts on the side of the helmet appear to result in greater injury severity than impacts at the top of the helmet. Enlarging the protection zone and optimising helmet design would result in further optimisation of shock absorption capabilities and overall protection, both during impact with flat surfaces, and impact with edgy surfaces, such as collisions with the edgy parts of cars and trucks. However, extending the surface covered by a helmet may also increase (thermal) discomfort. Future efforts should continue the multidisciplinary approach initiated in the present network.